Yesterday afternoon over 97 million viewers in the United States watched the end of the 2007 football season in Super Bowl XLII (does the Pro Bowl really count?), and what an exciting end it was this year. I think the only problem with the game was the decision of the MVP. The Giants defense is what kept them in the game and allowed Eli Manning to make the final drive for the win, followed by the defense shutting down the Patriots in the final 35 seconds completing the upset. With that said a defensive player should have been the Super Bowl MVP, as they kept Tom Brady pressured during the game and forced him to fumble ending a drive which could have led to points by New England in the second quarter changing the direction of the game. Speaking of fumbles, about a month ago while in Hawaii I had a fumble of my own.

Of course my fumble was not directly tied to football, it instead involved a wide angle Nikon lens while hiking Kilauea Iki at Hawaii Volcanoes National Park. One morning I decided to wake up early and hike the trail down into the former lava lake. Everything was going well and as the sun started to rise the crater begun to slowly fill with light. Standing alone on the warm surface was quite an experience, as it was almost fifty years ago this was filled with lava. As I started to take images of the surroundings I quickly was entranced with the place. That was until during a changing a lens my lens somehow decided itself to bow to the volcano goddess but went a little too far landing almost directly on the front element. The one saving grace of this event was the lens hood was attached and took a sizable amount of the impact. As the lens hood detached from the lens and went flying, I picked up the lens and noticed a gash in the front element in addition to the focus and zoom rings were no longer movable. Many things go through your mind at a time like this, but due to the nature of the accident I was quite well composed since there was not much I could do as the damage had been done.

One of the challenges I had for the final five days photographing in Hawaii was the limitation I now had with the focal lengths available when composing images. Looking at the results I feel I was able to think of images I may not have previously taken forcing me to think differently. This event allowed me to learn the lesson of adaptability which will remain with me, in addition to being more careful with changing lenses and using the lens hood at all times. Upon returning home to Colorado, I took the lens to a repair shop not knowing how much it would cost to repair the Nikon 12-24mm lens. After receiving the estimate I was satisfied with the repair cost (it’s hard to be happy with the extra expense) and at this time it is in the process of being repaired.

The following is an image taken right moments before the fumble… 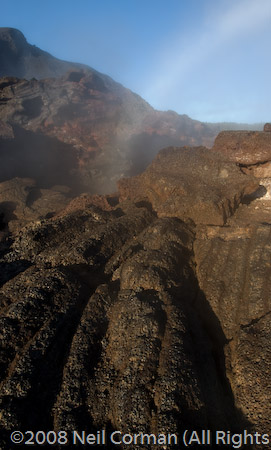