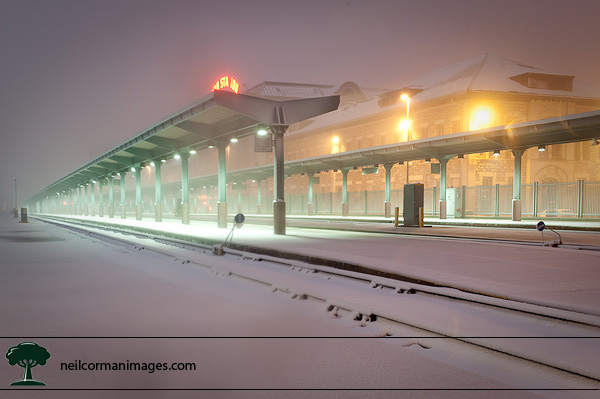 The month of March is when we receive the most snowfall in the city of Denver, so it wasn’t surprising that in late March 2010 a spring snow hit the city.  With the impending snow, most people left work a little early to make it home before the snow started really falling.  As those people were leaving work, I was heading to the city with my camera as the roads were starting to get a little snowpacked. There was an image I was hoping to get this evening and had planned around ending up in that location.  As I arrived near Union Station the snow was coming down at a rapid rate but more so the wind was howling.  At first I took cover near a building which provided some protection from the elements, it truly was miserable.

I proceeded towards millennium bridge near the train station and with the darkness starting to fall you could really see how quick the snow was falling in the lights.  By this time I was starting to get soaked in the wet snow and I knew this would not be a long evening out in the elements.  Starting to make my way towards the final location I was thinking about, I noticed the scene on the platform at Union Station.  Finding a spot I started to frame my image, which is when I realized the camera lens was pointing into the wind allowing the snow to build up quickly.  This would force me to continue to clean the lens with something dry often, however most everything on me at that time was wet from the snow.  I was able to find some dry clothes to use to clean off the lens and snapped some images.  At this time I decided to call it a night as I headed home to the warmth of my house, prior to getting to the final location.  This will have to wait until next year.

Currently the area around Union Station is being redeveloped and there is now a chain link fence in the area where this photograph was taken.

This image is available as a print or also as holiday cards.