Today is the final day of 2016, in closing out the year I have looked at the images I took during the course of the year and have selected by favorites for the year as posted in chronological order.

Spring Trees in the Colorado Snow 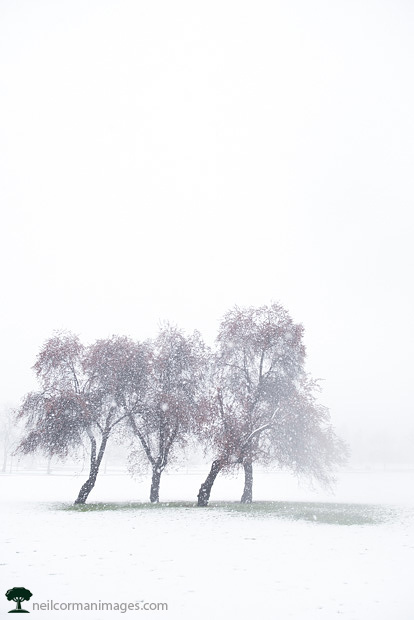 Over an April weekend a fair amount of spring snow fell over Denver. With the warm temperatures many trees were already showing their blossoms which made for a nice scene to photograph. I headed out in the City Park area with my camera to capture some of these scenes.  As I walked through the park I quickly found trees with red or white blossoms as well as trees already showing their leaves for the summer season. These colors made for an interesting contrast to the black, grey and white normally you would find in the winter.

Spring and Winter in City Park 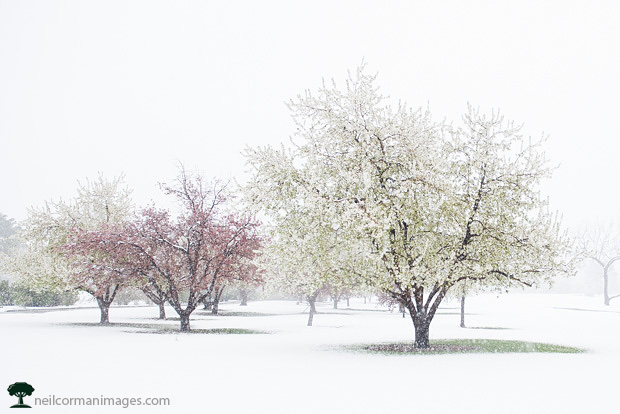 It has been about ten days since a snowstorm provided some great contrast in the Denver of winter and spring. Walking around City Park I found this group of trees showing their blossoms as the snow provided a winter covering on them. With the snow continuing the fall it wasn’t long until the trees were fully covered in heavy snow on their branches.  This snow didn’t last long as the temperatures started to warm up again during the week quickly making the snowstorm a memory to look back at in pictures and memories. 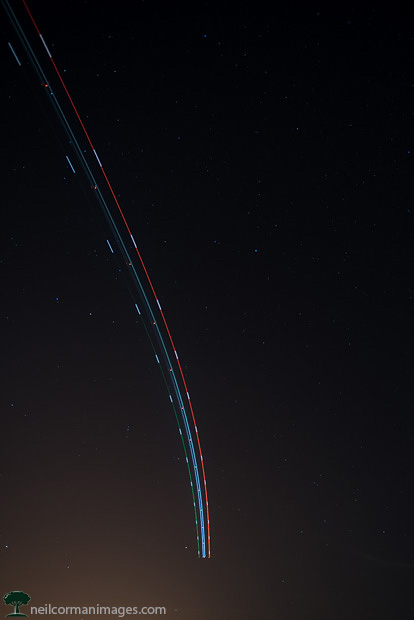 On Day 4 of Thirty Days 2016 I headed out to the plains of Colorado to photograph. Noticing that the wind was blowing out of the south I found myself south of airport to photograph takeoffs. It took a little while for a handful of aircraft to depart in that direction, but after a while I was able to capture some images of the lights moving through the night sky. You may remember the original Aircraft Departing image I took in 2008 with a nice turn happening by an aircraft. Unfortunately this didn’t happen tonight but it was a fun and challenging evening of photography. 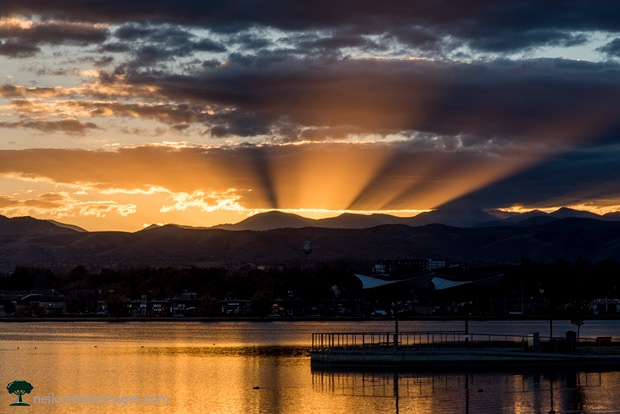 I was driving home and as I approached Sloans Lake noticed the sunset over my shoulder and how the rays were filtering through and lighting up the sky. It was the area I was thinking of photographing on this day and I quickly made my way to a point on the east side of the lake facing the mountains. With the sunset standing out people who were walking around the lake stopped to take it in as well getting a special treat on this nice fall day.

Wispy Night on the Plains 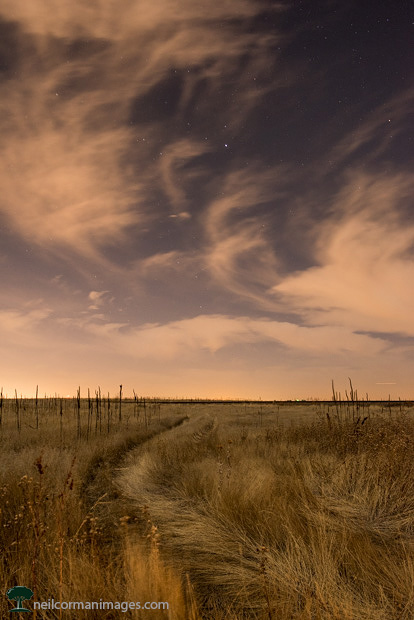 It was an evening on the plains and I found some long exposures to capture and just as I was getting ready to head back home I stopped near a railroad crossing which I was gong to photograph. When I was getting out of the car I noticed the trail in the grass which mirrored the wispy look in to the clouds and worked to compose an image to capture this between the ground and the sky on this evening with the city lights of the Denver area in the distance. 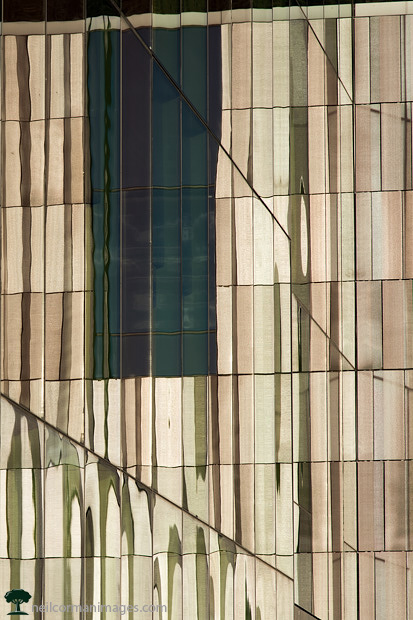 Earlier this year the Alaska State Museum reopened in Juneau, for the last couple of years they were constructing a new building which I was able to watch grow from the ground up during my visits there. On this day I was walking past the museum and noticed the reflection being case from the glass windows in front. The majority of this image is glass which is reflecting the siding of the museum which is showing a little on the right of the frame, looking carefully you can see the difference in the color between the two.  I do hope to be able to visit the museum itself soon as well during an upcoming trip. 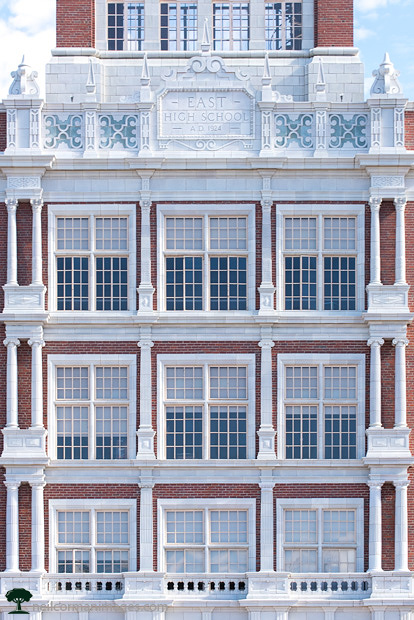 As I was driving on 16th Avenue, I looked ahead and noticed Denver East High School in the distance. This drew my eye and at first I was thinking the clocktower would be the subject for today however as I started to photograph the facade of the building the detail here is what I focused on instead. While East High School opened in 1875 and was the first high school in Denver, the current location was not built until 1924 as noted at the top of the facade. 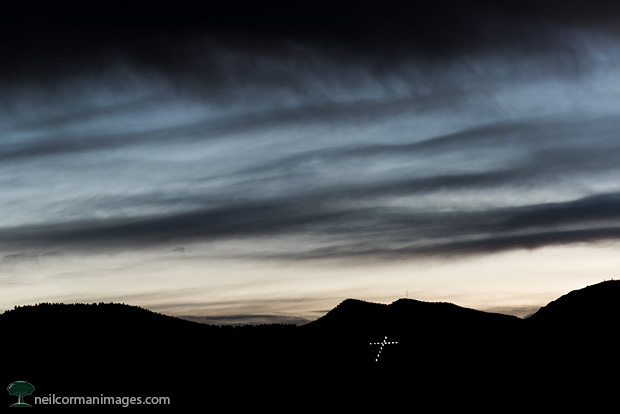 You most likely have seen the cross in the foothills to the west of Denver which was first illuminated in 1964. The location of the cross is Mount Lindo Cemetery which is accessed from Turkey Creek in Morrison.  As I was driving along Alameda I noticed this perspective with the sunset and found a spot to capture the ridge line as well as the colors in the sky on a windy day.

Treadwell Mine Pump House at Sunrise 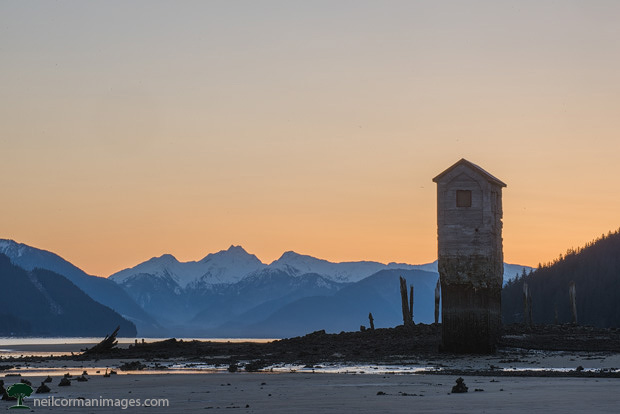 It had been clear in Juneau for quite a few days in a row so I took advantage of this and headed to Sandy Beach to photograph the Treadwell Mine Pump House.  In  the winter sunrise will happen down the Gastineau Channel which allows the sunrise color to fall behind the pump house which I captured just prior to the start of winter. On this morning, low tide had just occurred at 1.2′ and it was starting to head towards the 20.1′ just after lunch.

The Pump House is one of the few remaining structures of Treadwell and is a well known site for those familiar with the Juneau area.

Holiday Lights at the Botanical Gardens 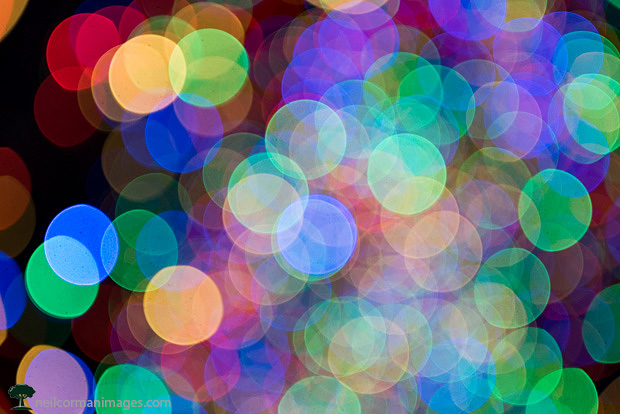 This year I went to the Denver Botanical Gardens during the Blossom of Lights event which is held in December each year. With an impressive display of lights in a winter setting I strolled through the gardens enjoying the holiday lights which overtook the gardens. With my camera in hand I started taking pictures of the various displays and once the last of twilight had diminished I started to try some different ways to capture the lights as in this image here which was taken looking up at a large tree filled with lights.