During the summer of 2011 the Tennyson Streetscape project took place in Northwest Denver. I spent most of the summer documenting the changes taking place on Tennyson between 38th and 44th Streets. In addition to the walkability of the street they also removed the streetcar track which were under the current paving. The following scene was taken just north of 38th looking north along the street. The rail which you see here is most likely 100 years old as it was starting to be removed from the street. The majority of the rail extracted was recycled and in talking to the contractor they included this in their bid to lower the cost for the city.

This past fall I revisited this area on a Sunday morning to capture the difference along the street over the nine years. From about the same location I was able to capture this image. 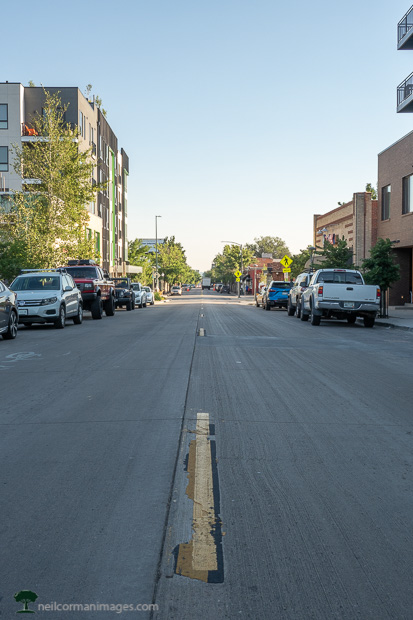 One of the first things you may notice is the development which is starting to go vertical along the street. After the streetscape project took place lots of new development moved into the area onto Tennyson but also the streets nearby as well. A new development is also in the works for the building beyond the orange barrel in the original image and also behind the white truck in the recent. It will be interesting to visit this same spot in the upcoming years and see how it continues to change.