If you have lived in Denver or along the front range of Colorado for any period of time you know snow in May is not uncommon at all.  So on the morning of May 1st two years ago looking out the window while working I decided to grab the camera and explore while the snow was falling.  As the weather had been warm the past few days there was not much snow sticking to the pavement however the grass was starting to get some accumulation.  I drove towards Washington Park and I had a location in my mind which I had photographed a few months earlier.  Driving south towards the park I noticed the steam coming off of Smith Lake at the north end of park and quickly changed my destination.  I started to walk around the lake and capture the elements of the snow and steam coming off the lake.  I had almost walked the entire lake when I found an interesting tree which I didn’t recall the other times I was in the park.  Walking back from the tree I liked how it framed the scene of the lake and light post and made the Snowy May Day photograph. 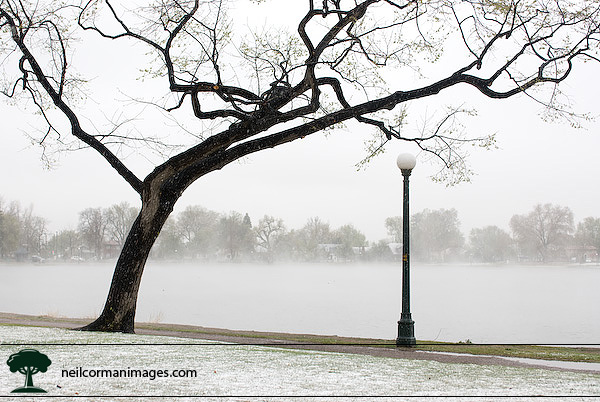 One comment I get with this image when someone looks closely is that the photo itself is color.  Depending on the size of the image, the first thought which goes to their mind is that the image is black and white until they notice the grass in the image.

This is not the last you will see of this tree in the Behind the Picture series.

The first question I get when someone looks at my photograph of Rainbow Curve is always, “Were you in an airplane?”.  When I let them know my feet were on solid ground for the photograph, I then get the follow-up question of “What time did you have to start climbing the mountain”?  Almost always they are surprised to know that my car is probably five feet away from where I was taking the picture.

The image of Rainbow Curve in Rocky Mountain National Park is one where I was in the right spot at the right time.  In September 2008, I was in Estes Park for the finale hike of the Team in Training season where I hiked Flattop Mountain.  Already being in the area, I decided to stay an extra day and photograph prior to heading home.  While planning the morning I was thinking of a few places which I could head to near Bear Lake and prior to sunrise started to make the drive up Bear Lake Road.  I was about halfway up the road when I just thought to myself that it would be difficult to clear the cloud cover you could start to see in the pre-dawn light.  In a split second, I found myself at a turnout and making a 180 for the risk of going up Trail Ridge Road for sunrise.  I knew from where I was it would be about 30 minutes to get up Trail Ridge Road, and that sunrise would occur in around 40 minutes.

As I backtracked and drove up Trail Ridge Road, I was wondering to myself if I had made the right decision.  That was until just around treeline when I climbed out of the clouds to clear skies.  The first thought was where could I pull off to capture this sunrise and that Rainbow Curve was maybe a 1/2 mile away.  The area at Rainbow Curve looks back towards the east and on a clear day you can see Estes Park and out to the front range of Colorado.  This morning it was just clouds.  Starting to set-up for sunrise with about 10 minutes to spare other people stopped as well to see the view.  Some of these people stayed for sunrise, while others continued up the road and towards Grand Lake.

As the sun started to rise above the clouds, I looked for different compositions using the mountains rising through the clouds to give a perspective that I was indeed close to earth and not flying across country in an aircraft. 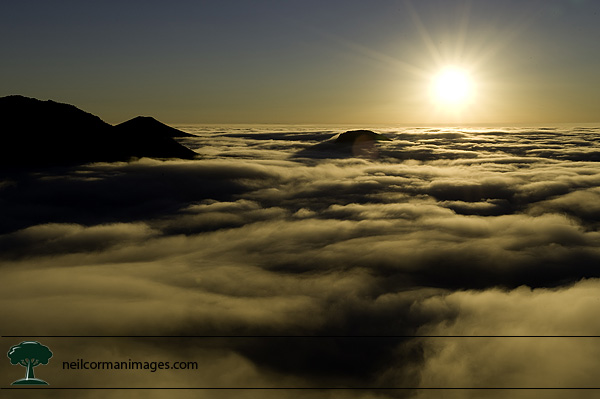 On February 27, 2009 the Rocky Mountain News published the final edition of the newspaper.  Knowing it would be a memorable day in Colorado history as the paper had been in existence for almost 150 years, I woke up before dawn in the pursuit of some copies of the paper.  I guess I was going a little overboard since the first location I stopped at to get the paper did not have their copies yet at 6am.  I finally found a stack of the News at a nearby 7-11 and purchased a handful as well as an edition of the Denver Post, which was the main competitor to the News.

While walking home I was thinking of how many people over the years had received the paper on the front door step of their home and that it could be an interesting photograph.  The one problem was that the sun was just starting to rise and where my porch is located it needs to be about an hour after sunrise for the light to hit the porch at that time of the year.  Once I was home I took a little nap, and woke up seeing the light was just about right at that time.  Placing the paper on the porch with a slight toss I worked to get the image I was thinking of on the walk home.  The front of the paper was quite unique for this final edition and I wanted to focus on the the memorable words “Goodbye, Colorado” gracing the cover.  This meant using a shallow depth of field for the images I took that morning.  While there is some color in the wood on the porch, I also changed the image to a pure black and white image as I felt this was appropriate for the story I was telling.

I picked the one image which I felt told the story best, and this is one of the more popular images which I have sold in the past year. 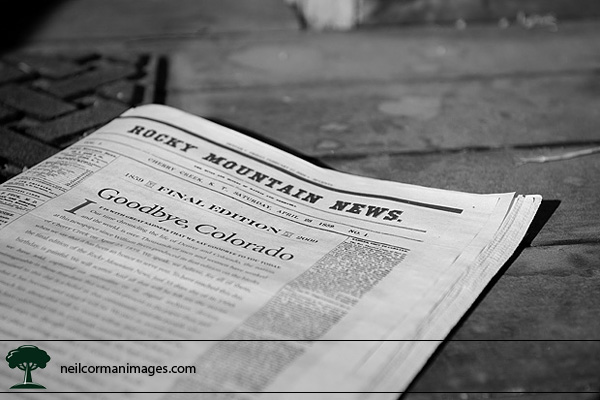