This weekend marks the first group training for the Team in Training program here in the Denver area.  As I have mentioned before Hike for Discovery is now a part of Team in Training and for the summer season I will be a part of the support staff as a Team Captain.  For this first weekend we will be meeting at REI for a gear clinic, which works out well as the temperatures will be in the 30s over the weekend.  The finale hike this season will be at the Grand Canyon in one of two events.  The larger of the two is the Grand Adventure, which is an overnight trip into the canyon.  I am hoping to make it to the Grand Canyon for the primary event which will be a day of hiking and support of the fund raising participants.

Lastly, if you would like to participate in this hike event it is not too late to sign up for this season.  Please feel to contact me, and I can put you in touch with someone at the LLS office.  The four sports which make up Team in Training are Hike, Triathlon, Run/Walk and Cycle.  Each have a great events offered and even if you are not in the Denver metro area there are chapters all across the country who participate as part of Team in Training.

The linking the week site for this week brings back the Leukemia & Lymphoma Society which you may recall I hiked to raise money for last year as part of Hike for Discovery.  As of December 1, 2008 HFD is now part of Team in Training which is the featured site for this week.  There may be snow outside right now depending on where you live, but Team in Training is starting to have informational sessions for the Summer 2008 events.  Team in Training is the main fundraising arm for LLS, and as you raise money you also train of an event where you may Run, Walk, Tri, Cycle and now Hike.  I will be a part of the Team in Training Hike support staff this season as a Team Captain.  If you have ever thought of doing one of these events TnT is something you should consider as it will help you get to that goal.

During the summer I participated in Hike for Discovery benefiting the Leukemia & Lymphoma Society.  Hike for Discovery has now been rolled into the Team in Training grouping and will continue on once again in 2009 with two different seasons.  During the Hike training events I would bring my camera along to document the various locations we would hike each Saturday and help tell the story of the effort.  As this was so much of the summer months the June 2008 image is at Heil Valley Ranch outside of Boulder.  It was pretty warm on this day as we hiked around twelve miles at a low elevation.  Towards the end of the hike, I noticed a field and took the below image with a point and shoot camera.  With some adjustments in Adobe Lightroom I was able to bring some color and punch to the image under conditions which were not too optimal for landscape photography. 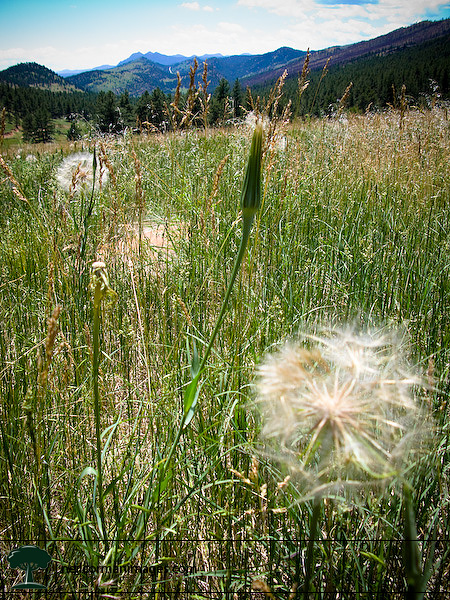 Be sure to check out more about the Hike for Discovery/Team in Training: Hike effort on the left hand side of the blog page.

It was just a week ago at this time I was heading down from Flattop Mountain in Rocky Mountain National Park as the final hike in the Hike for Discovery program.  Yes it is not even 9am right now as I write this, but on hike weekend I received a 3am wake-up call so we could depart Estes Park and head up towards Bear Lake and the trailhead at 3:30am.  Knowing the hike would be something different it wasn’t easy to sleep in addition to all the commotion around the hotel in the early morning hours.

As the van headed towards the trailhead in the morning darkness the stars were quite bright outside the window, even leading to a little singing from the two girls from the Arizona chapter (Cherie and Talia) taking part on our hike.  Yes the song being song was "the stars at night are big and bright…", which was dedicated to Monica from the North Texas chapter also hiking with us.  The other hikers in our group were Jay from Illinois, and Jeff and Vicki from the Rocky Mountain group giving us seven hikers and a couple of guides for the nearly 3,000 feet elevation gain to Flattop.

As we did the final preparations at Bear Lake it was dark and empty, but at 20 minutes past 4 we started out towards the top of Flattop Mountain with our headlamps leading the way.  Hiking a little bit along the lake we soon made a turn off the trail and started to rise in the darkness.  We stopped for a little bit to adjust layers as it was starting to get warm as we hiked.  It was quiet with the sound of the wind blow apparent even below treeline.

Starting to climb out of the trees the wind was picking up and it was now time to put layers back on as it was getting cold.  Also at this time you could start to see the hints of morning as twilight started to show.  We were still about two miles away from the top and I knew it would be a cool finish to the hike as the wind was howling and the coldest part of the day was now here, the period before sunrise.  Also with some clouds on the east horizon we would have to wait a little bit prior to getting the full benefits of the morning sunrise. 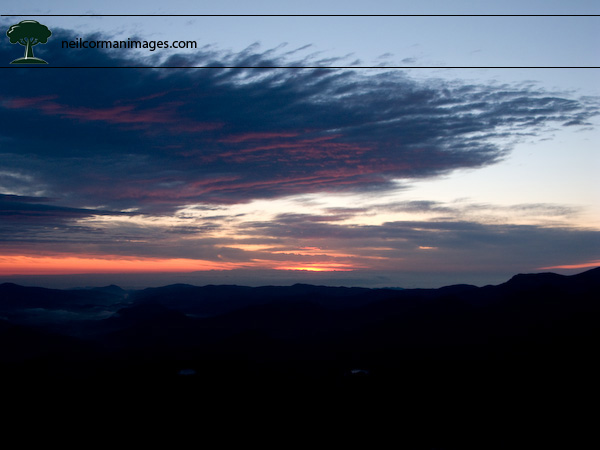 Going back and forth on some switchbacks we were treated with a view of Emerald Lake from high above it, but trying to minimize the stops was the key at this time since it was getting quite cool especially with the wind howling. 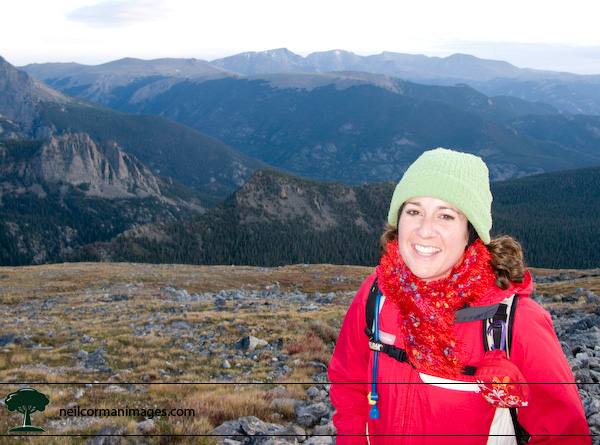 We pressed on and finally got into some sun as we approached the top of Flattop making the hike a little better, but the wind was the main element to fight by this time instead of the 12,000 feet elevation. 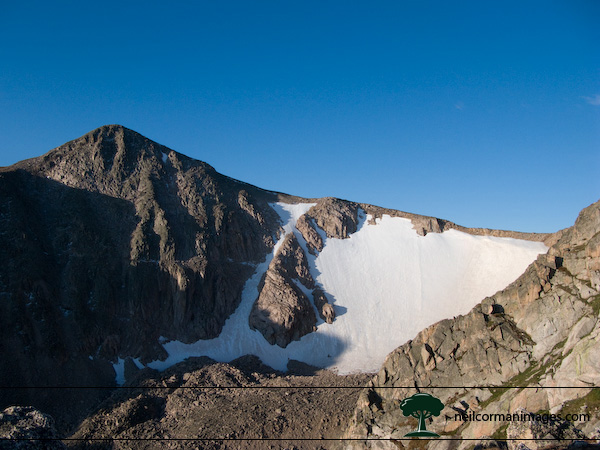 Around 8am we arrived to the top of the mountain and decided based on the conditions it didn’t make sense to climb the next part to Halletts Peak as it was quite windy (40 mph) and cool.  You could also see the condition 300 feet above on Halletts would be worse, especially having to scramble our way to the top.  We did walk over towards the saddle and looked at the surroundings. 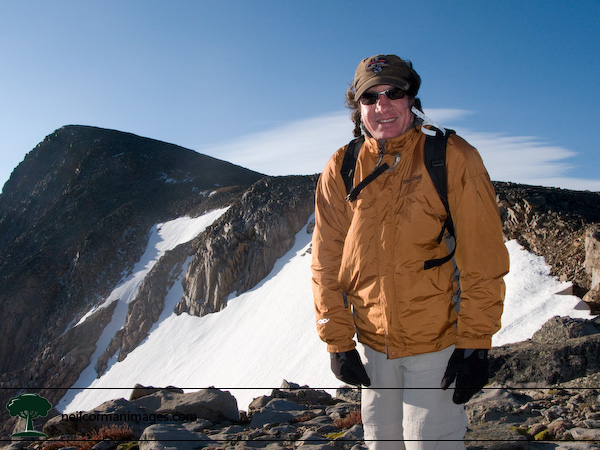 Now that we had made the destination of Flattop Mountain we started back down and had the wind behind us for the most part.  Trying to get back below treeline was the goal sooner than later as it would be a little warmer by then. 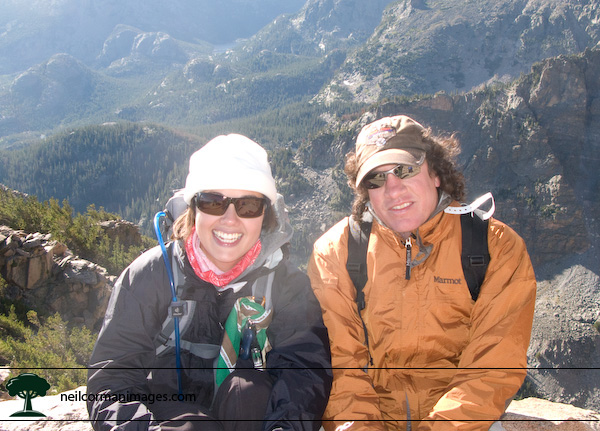 As we continued down, people were heading up the trail with some prepared and others probably not for the conditions they would encounter on the top of Flattop.

Once at Bear Lake it was a different scene as families were out hiking around the lake and we were still somewhat bundled up from the hike we had just completed.  It also wasn’t even noon and it seemed more so like afternoon due to the early morning.  However it was a quite sense of accomplishment after spending almost three months hiking, and fund raising for this event.

For the Hike for Discovery event at Rocky Mountain National Park 55 hikers from six different chapters raised over $250,000 for the Leukemia & Lymphoma Society.  It is still not too late to donate if you have not done so at this time.  You may donate by visiting the Neil Corman Hike for Discovery Donation page .

I would like to thank you everyone who supported my hiking this summer and more so the Leukemia & Lymphoma Society.

Lastly, Hike for Discovery will take place in 2009 under the Team in Training name with two seasons planned.  If this is something which interests you, contact your local Leukemia & Lympoma Society office and ask to be notified when the information sessions will take place.

The final Hike for Discovery group hike brought us to Camp Dick just west of Peaceful Valley and not to far south of the border of Rocky Mountain National Park .  The planned hike for this day was around 16 miles or so, starting on the Buchanan Trail towards Lake Gibraltar.  The group split up into two along the route and we made our way towards the Lake situated 8 miles up the trail.  As we navigated up the trail we stopped at the junction of Trail #910 and a path leading to a 4×4 road.  Heading further up the trail we entered into the Wilderness area and finally onto the St. Vrain Glacier Trail .  Following the trail along one of the tributaries to the St. Vrain river we continued hiking and ended up going through a boulder field which soon led to a creek crossing without a bridge.  At first the group looked for a crossing, but after a little while a makeshift crossing was made which looked a little sketchy at best. 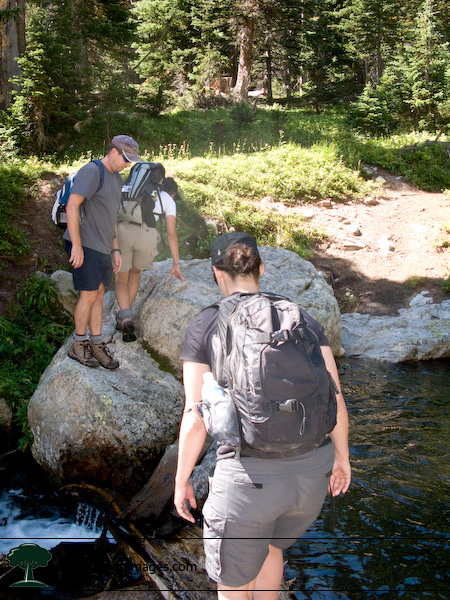 Knowing it was the week prior to the final hike, I played it safe and retreated with part of the group and hiked to Red Deer Lake. 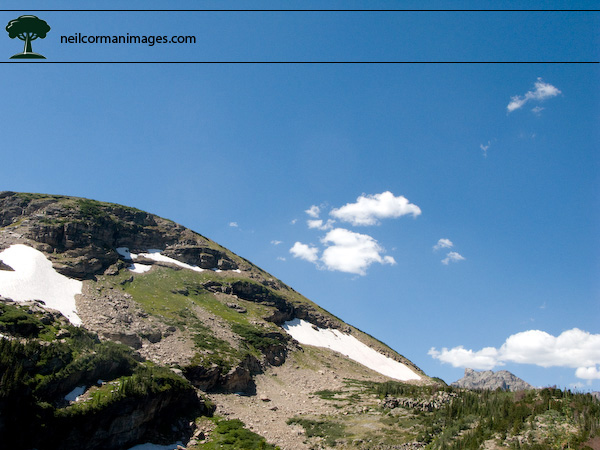 The trail to Red Deer Lake took us back the mile from the last trail junction and then up to the lake, which was just under two miles further from the junction.  Once at the lake we stopped for some lunch and snacks prior to started about a 6 mile hike back to the trailhead at Camp Dick. 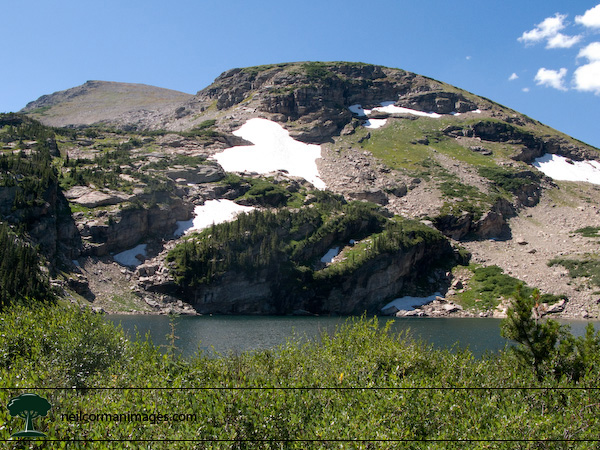 Those miles back to the trail head seemed to take quite a while, but after a few hours we were back after a nice day of hiking over 15 miles.  It was a memorable hike, and one which got us psyched up for the following week at the trip to RMNP.  But there was also no rain or threat of rain present at all during the day which was a nice change.