Just after Christmas in 2014 I visited Wings over the Rockies at Lowry. The museum has a B-52 Bomber which is on the former Lowry Air Force Base, For this year lights were put out to decorate the airplane and with fresh snow it was the perfect opportunity to capture the holiday season. This was the only year which this was done as the the decorations did not sit well with the owners of the aircraft.

Seven years later during a light snowstorm in the Denver area, I revisited this location to capture the B-52 in front of the museum. On this visit the lights were not on the aircraft, but could be found on the trees around the hangar. 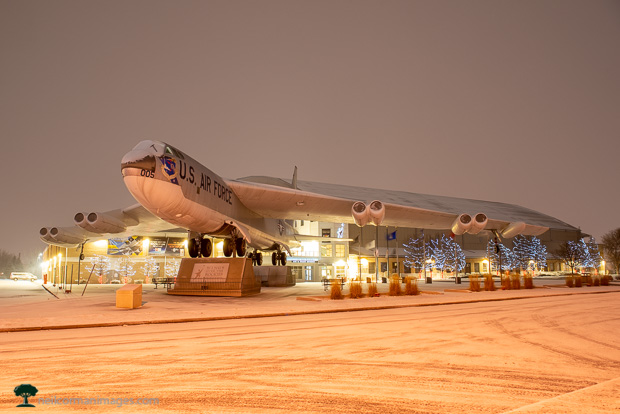 It is quite different without the lights on the plane itself, however for one year we did get to see the aircraft decorate for the holidays.

If you have driven through the Denver Metro area along Interstate 70 over the years the I-70 viaduct was most likely part of your drive. The nearly two mile elevated stretch of Interstate from Brighton Blvd to Colorado Blvd existed for over 50 years, however with the Central 70 Project putting I-70 below grade the viaduct was not longer required. Then and Now looks at this infrastructure over the past few months as the traffic shifted from above to below grade and the demolition of viaduct took place.

As the initial part of the Central 70 Project took shape, it was still possible to drive under the viaduct on 46th Avenue. 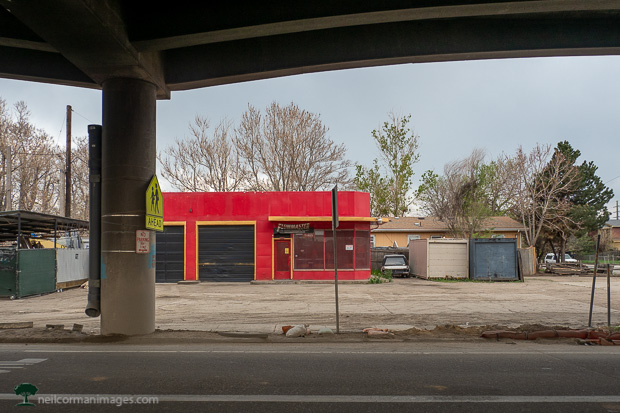 and under the viaduct looking up are the architectural elements which we have noticed over the years. 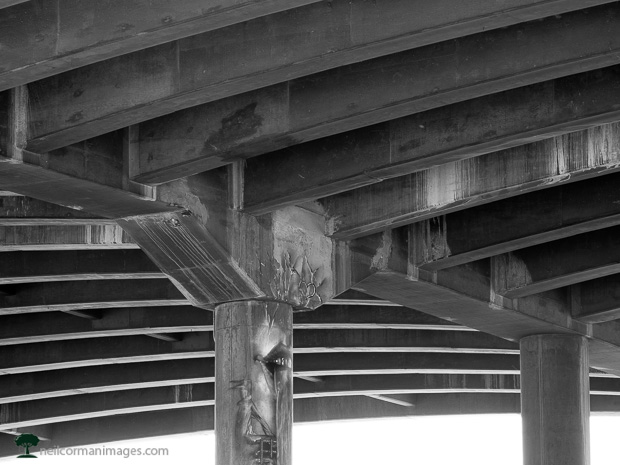 However not far away the lowering of the Interstate was taking place. 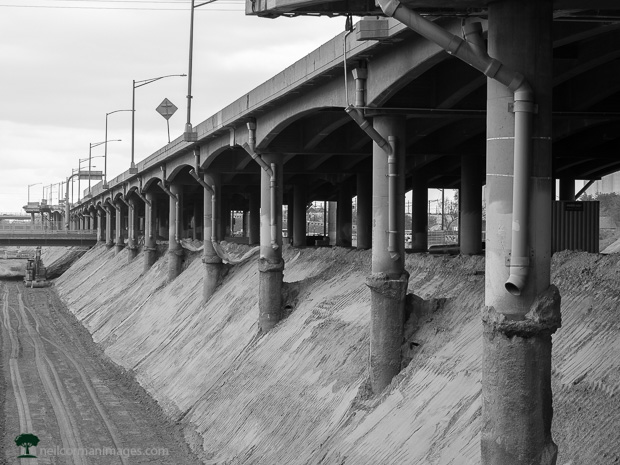 Just prior to the switch of the traffic from the viaduct, CDOT held an open house for people in the community could walk along the new Interstate 70 and learn more about the project. 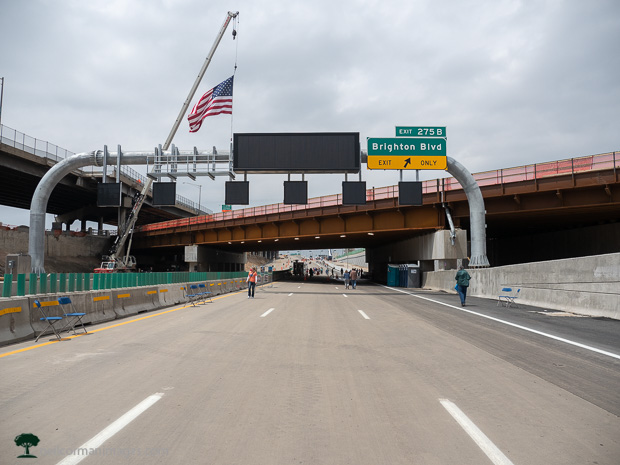 In mid-May 2021 the traffic shifted to this portion of the Interstate and the demolition of the viaduct started. 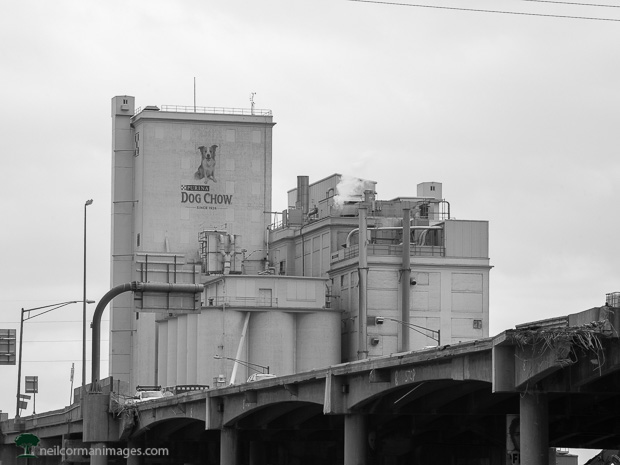 The initial demolition is well on the way at the west end of the structure. 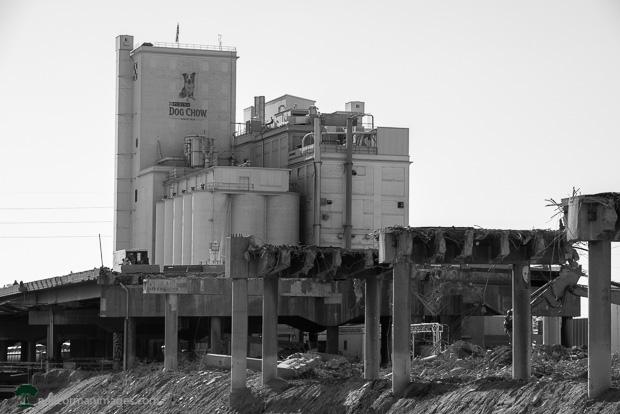 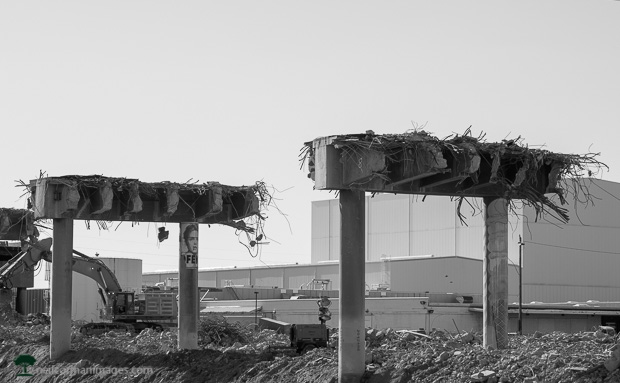 By mid-August the majority of the viaduct has been removed. The final portions by the Purina plant and well as a small portion along the east end is all that remains. 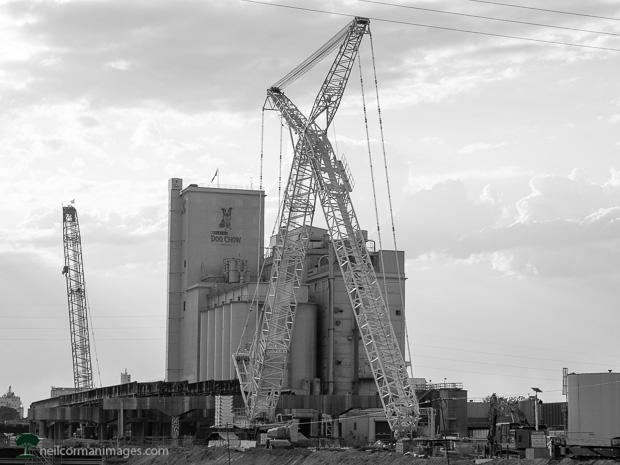 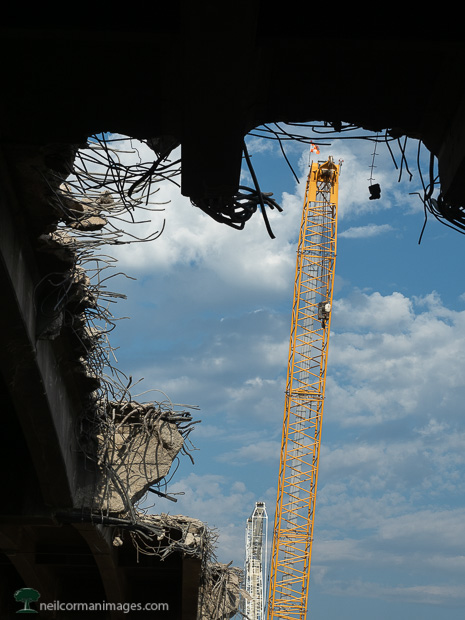 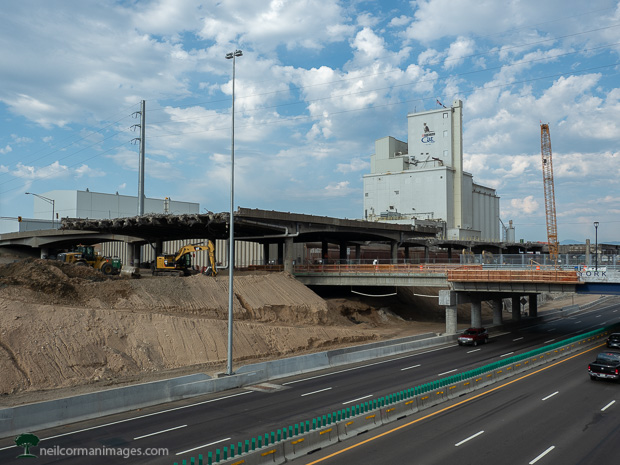 Over Labor Day weekend, the steam engine Big Boy 4014 stopped in Denver on the Union Pacific Steam Tower. As it prepared to back into the yard it cab be seen over the interstate. 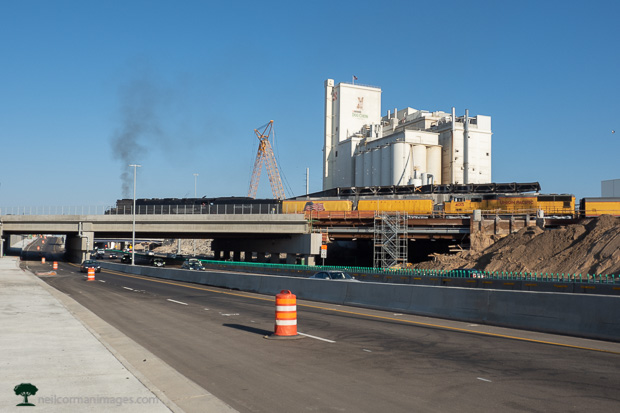 Now that the viaduct has been removed, the final portions of the Central 70 Project will be completed over the next couple of years. I am sure that many have memories driving on this portion of Interstate over the years and shift of the road to below grade will be a significant change.

Between Coors Field and Union Station there was a brick walkway which I photographed in the past. When I captured this image I was quite low to the ground, I was laying down. Being early in the morning there were not many people around, but on a gameday this would be packed with people. In this image I wanted to focus on one brick giving a perspective of a little mystery in the distance.

Now that the construction in this area is complete with the building of McGregor Square in the former parking lot, I went back to see how this walkway has changed. 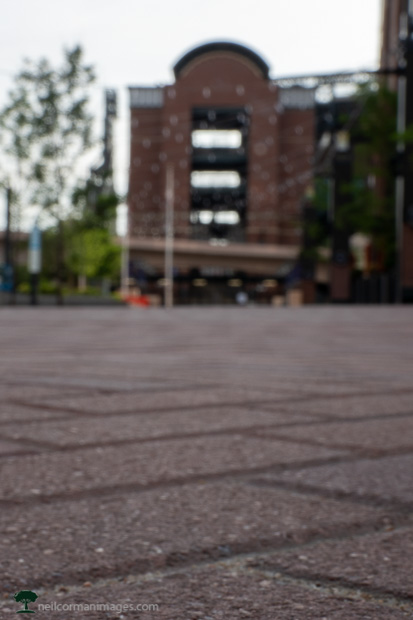 Unfortunately the original bricks which were along this walkway were not kept as a result of the construction. I felt this added character to the Lower Downtown area and a throwback to the area years ago. While this may be a minor change in the overall vision of the area, I wonder how many others have also noticed this change?

Over the years I have captured the first sunrise in Denver of the year. As the city continues to grow looking at the current year and comparing it to the prior you may find changes. However when you look over the years you start to easily see the differences in the growth in the city.

On this image I took at the start of 2014 the skyline is filled in with the growth since the start of this latest boom in the central core of Denver. Fast forward to 2021, or seven years later, and a handful of buildings make a noticeable change along the skyline. Looking careful you can also see some tower cranes in image. In the next few years we will continue to see the growth of the skyline. However it may be harder to notice it from this perspective as the growth continue to head north of the downtown core. Other buildings added will be behind by those already along the skyline in most instances. It will be interesting to see how this will look in five to ten years.

During the summer of 2011 the Tennyson Streetscape project took place in Northwest Denver. I spent most of the summer documenting the changes taking place on Tennyson between 38th and 44th Streets. In addition to the walkability of the street they also removed the streetcar track which were under the current paving. The following scene was taken just north of 38th looking north along the street. The rail which you see here is most likely 100 years old as it was starting to be removed from the street. The majority of the rail extracted was recycled and in talking to the contractor they included this in their bid to lower the cost for the city.

This past fall I revisited this area on a Sunday morning to capture the difference along the street over the nine years. From about the same location I was able to capture this image.

One of the first things you may notice is the development which is starting to go vertical along the street. After the streetscape project took place lots of new development moved into the area onto Tennyson but also the streets nearby as well. A new development is also in the works for the building beyond the orange barrel in the original image and also behind the white truck in the recent. It will be interesting to visit this same spot in the upcoming years and see how it continues to change.