In 2010 as I wandered around the Commons Park area I came across the following perspective of the skyline of Denver. This was taken from north of 20th looking across the Union Station area. Just like many others in the Then and Now series it has changed over time to what it looks like today, ten years later. 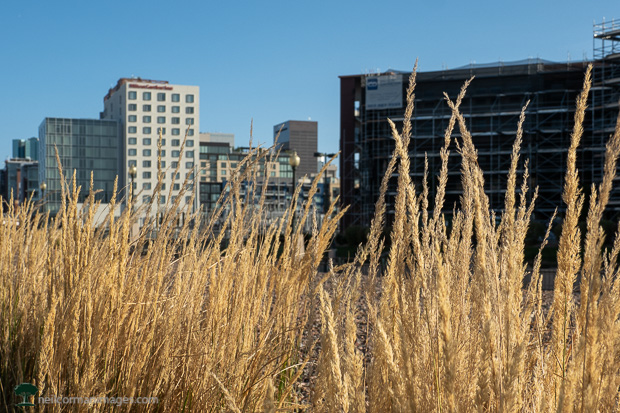 While the long grasses which mimic the buildings still exist in this area, there is another layer of growth between the then and now of the two scenes.

Between the two images you can place two of the same buildings i the scene. The first is to the left of the frame which is 1999 Broadway (built in 1985), and in the now is covered up just a bit so you only see the upper portion of the building. The second is in the middle of both images which is 1225 17th Street and was built in 1982.

As construction started around the Union Station area there is this view of the Davita Building which I knew would not exist in the upcoming years. I had been drawn to this perspective as it allows for a simple look at the lines of the building and the perspective of Millennium Bridge in Denver. On this day there was a light snowfall in the city which allows the blueish hue of the building to standout on the overcast day in the city. Over time the redevelopment of the Union Station area quickly took shape which now provides the following perspective of the Davita Building from the same location. 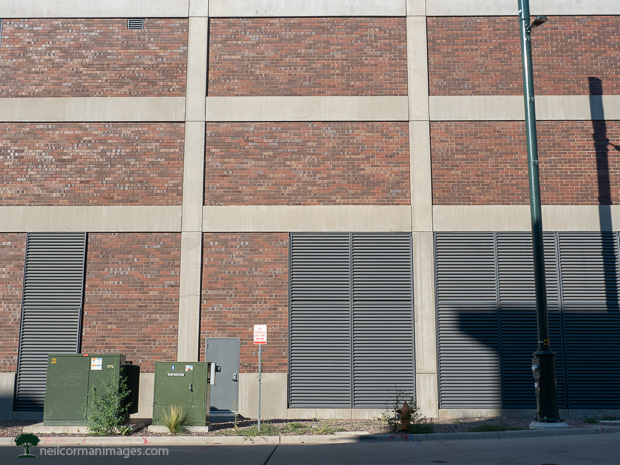 This is the first of two buildings which have been added over the years which obstructs the view. The Grand Apartments, built in 2017, is the wall which we are looking at in this image. The second building, built in 2018, is closer to the Millennium Bridge and Davita partially occupies that building as well.

While the simple view of the Davita Building from 18th Street is no longer available the new development does allow other opportunities to look at the lines, patterns and reflections of this new development.

In 2012 I found myself walking across one of the newer pedestrian bridges from the Commons Park area of Denver towards Union Station. This bridge crosses the three mainline railroad tracks which run north and south along the front range as well as some light rail lines for RTD. 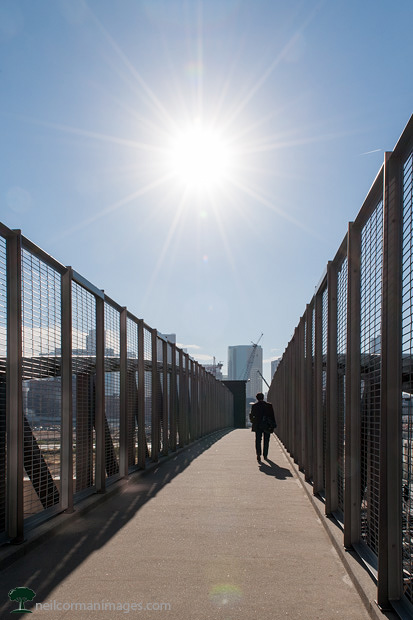 On this morning you could see the buildings in the distance of downtown Denver and the cranes for the start of the revitalization of Union Station and the bus depot area.

With the majority of the build-out of the Union Station area now complete I revisited this area eight years later (October 2020) to see the change which has taken place. 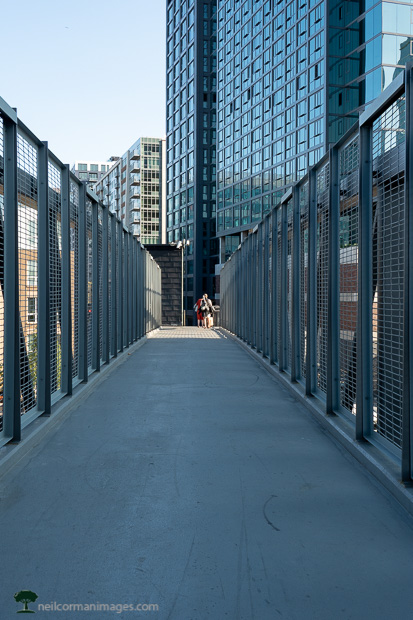 There have been quite a few buildings built over the past few years in the Union Station area which provides a perspective much different now. Where the cranes were in the original image is about 1/4 mile away from this vantage point and there are 4 buildings between this spot. The immediate building are The Grand Apartments, followed by two towers of Union Denver and finally one of the newest additions The Coloradan. The transformation over eight years is quite amazing and the majority of these buildings have gone up in just the past few years.

It has been a few years since I last headed out to Sloans Lake to capture sunrise, thus I thought this would be a great opportunity to revisit this location for the Then and Now project.

Over the course of the summer and fall of 2012 I visited Sloans Lake quite a few times to capture the sunrise over the city. Living close to a location allows you to revisit a place under different atmospheric conditions as well as direction of light telling many stories about one spot.

The 2012 reference images during the predawn light gives a nice background to the city and also the share of the skyline then. Eight years later I went to capture the scene at Sloans Lake once again. When I initially thought about revisiting the location it was with the intent of photographing the rising sun over the city of Denver. Upon arriving to the location the clouds were covering the city which changed those plans. However, in the matter of a few minutes the clouds started to show the colors of the sun before sunrise. 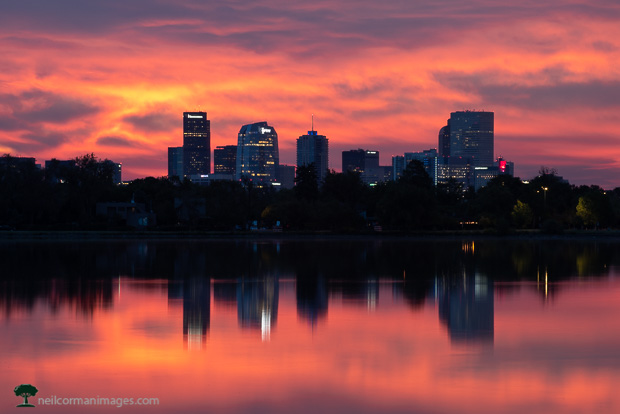 From the image itself the one noticeable change is the addition of 1144 15th Street or the Optiv Building. This building is right next to the Four Seasons, but from this perspective there appears to be more of a distance between the two based on the diagonal grid of downtown Denver. A lesser noticeable change is Block 162 which is located in the Central Business District. With Block 162 right next to the Hyatt Regency near it is enclosed by other buildings and while it will be viewable from some of the skyline images it will not be as prevalent as 1144 15th Street given the location and lower height.

For five years I had gallery nrc which was located on the 4400 block of Tennyson Street in Northwest Denver. In 2011 when we upgraded the sign on the building, I captured this image looking north on Tennyson Street. On the right of the image is Metro Frame Works followed by Tenn Street Coffee next door, this was a typical spring day along Tennyson. The area which we will focus on today in our Then and Now series is looking north along the street. 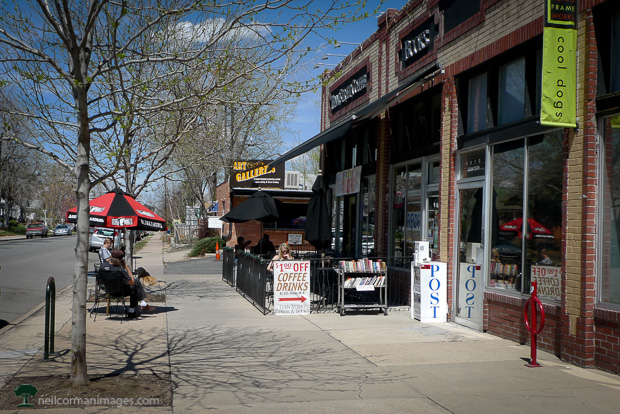 Earlier this month on a Sunday morning I visited Tennyson Street and took the following photo from the driveway of the former gallery building. To put it in perspective from the Then image, I am about 30 feet north and standing a little in the street. 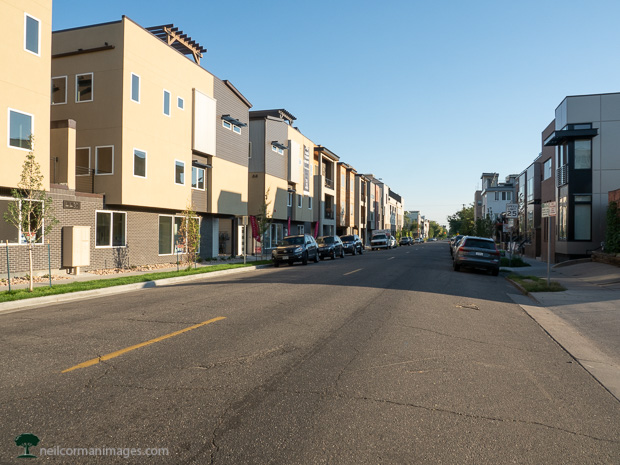 While it doesn’t exactly match the initial reference photo there is still enough to give a context of the change along this block in a short period of time. Almost all of the old houses on this block have been scrapped and replaced with multi-tenant townhomes.

When I closed the gallery in 2014 I could sense the change which was coming in the area and thought it would take around five to ten years, it did come much sooner. The Tennyson Street area had been “found” and the streetscape project in 2011 contributed, but it was also the ability to find a better value about a little more than a mile away from Highland Square and a ten minute drive to downtown Denver. Property owners who in some instances lived in the neighborhood for decades were willing to take the money being offered by developers and move elsewhere.

There is definitely a debate on how this change has impacted the small business owners who were formally in the area. I have seen some of the older businesses move elsewhere and new businesses come and go. However, quite a few of the established businesses have flourished as well as new ones to the area. This did not all happen overnight, and as I mentioned even when I had the gallery I was starting to see this change in the area and also the context of First Friday Art Walk on Tennyson.

Even though it is not in the image from this month, the sign remains on the gallery building with just the website we used for marketing all of our art galleries in the building painted over at this time. Not all of the businesses there are galleries, however five small businesses still exist in the building and contribute to the local economy.