Last weekend, I spent a couple of days at one of the newest national parks in the United States. Located near Alamosa, Colorado, Great Sand Dunes National Park and Preserve moved towards national park status when the Great Sand Dunes National Park and Preserve Act of 2000 was signed into law setting the blueprint for additional land to be purchased. In 2004 the park changed from a National Monument after 97,000 additional acres of land was purchased with the assistance of the Nature Conservancy. When you think of sand dunes you may think warmth through the whole year, however at an elevation of 8100 feet and with the highest dunes rising some 750 feet it is a park which experiences all of the seasons. Additionally including several 13,000 peaks the park includes a diverse range of features.

The following image was taken just prior to the wind picking up late one afternoon as I was walking on the dunes. Using my wide angle lens and getting low to the surface I wanted to bring a scene which a person could easily step into the image and place themselves on the dunes.

The final day of April brought temperatures near 80 in Denver. The first day of May, gave us rain, snow and at times a mix. Looking out my office window at the big flakes coming down from the sky I decided a quick trip to Washington Park was in order. After the short drive, I found a nearly empty park similar to two months earlier when we had a warm day followed by snow.

At the park, I made a loop of Smith Lake and found this tree which told a story of the day.

I imagine this will be the last snowfall of the season, or you would think, so the next trip to Washington Park would be to check out how the trees I found this winter and spring in the park look during the different seasons. 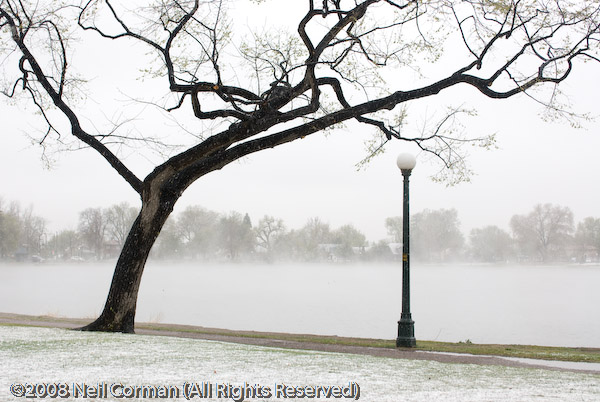 Linking the Weekend to the Week today is the website of Paul Corman-Roberts . You may notice the Corman in the name, and yes Paul is related to me as my brother-in-law. As a poet, pundit and pulpist in the San Francisco Bay area and author of Coming WorldGone World, Paul provides a unique take on the events of the world through his words. On his website you will find some samples or teasers of his work, upcoming events, products for sale as well as a blog with information he finds relevant. Be sure to check out his words, and let Paul or myself know what you think.

In early February I told the story of how I dropped a lens while in early January while in Hawaii.

Fumble! (How I dropped a lens)

Today I picked up the lens from the shop, as the piece which had been back ordered from Nikon for months arrived last week. Included with the lens were the damaged pieces, which I decided to photograph this afternoon. Playing around with available light for a few minutes got me the following image of the front element. I figured using the afternoon light flowing in the windows on a warm April day was the best option as this let the damage show on the glass as well as a second time on the piece of paper. 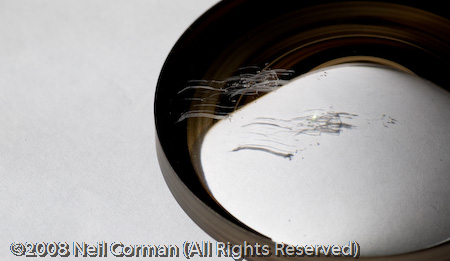 While the repair cost less than buying a replacement lens, I did learn a good lesson during this experience. Caution while climbing rocks, and the camera bag you have is there for a reason.

There are conditions in the world which you know exist, but until it strikes you personally it is hard to comprehend the significance of the condition. The significance of one of these events came to life for me in 2000 when I was informed Christina, the girlfriend of a college friend, was diagnosed with a brain tumor. It was a shock, and quickly did I learn the information behind brain tumors with the diligent research Jason conducted as he and Christina tackled this together. Not shortly after, I received a phone call from Venu, another college friend, who was also diagnosed with a brain tumor as well. Within a year two people who grew up with different backgrounds were both diagnosed with similar brain tumors.

The paths Christina and Venu took after their respective surgeries were quite different as the brain is a complex part of our body. Christina was able to get back to work and in spring of 2002 Christina and Jason were married. Venu continued to live on his own in the Bay Area but did not have the immediate results of Christina. Unfortunately as I stated above the brain is a complex part of our body and as time went on Christina started to have additional problems as a result of the tumor. While Christina continued to stay strong and fight as best she could on December 27, 2005 Christina lost her battle. Christina is not the only person I know who lost a battle with a brain tumor. A few years ago with a quick turn of events a neighbor on the cul-de-sac where my parents live was diagnosed with a brain tumor and with a short number of months lost his battle.Â Ever since this happened the end of the block has not really been the same.

While there are some unfortunate stories of brain tumors, I do want to say now seven years after his surgery Venu is winning the battle with his brain tumor. While he is not back to how he was before he was diagnosed with the tumor he continues to fight on and live his life. I know the hope someday is somehow the knowledge of how to fight a brain tumor becomes common knowledge to the medical community so we don’t have to tell these stories.

One way you can help is by visiting the National Brain Tumor Foundation website to find out more about brain tumors and how they are â€œdedicated to promoting a cure for brain tumors, improving the quality of life and giving hope to the brain tumor community by funding meaningful research and providing patient resources, timely information and education. In addition this Saturday in is the 14th Annual Bay Area Brain Tumor Walk and Angel Adventure. Venu is walking in this event again this year and I have no doubt Christina will be in his thoughts. If you wish to sponsor his walk you may do so on is walk page, or you may support NBTF from their website as well.

As a side note, Venu is featured on the brochure for this walk this year not only in but I have also noticed his picture on the walk coming up later this spring. He is on the far right of the picture.

I was recently going through a list I accumulated of businesses and websites I was aware of doing business, and thought how can I help others become familiar with these individuals I know. If you are reading this is a different town, state or country you may not need the services some of these businesses offer but there are others which may be utilized no matter where you are located. With a mix of readers to my blog and a growing list of these types of sites, I have decided to make Monday “Linking the Week”.

Every Monday I will post a link to something of interest for you to check out, while some may deal with photography others may deal with business needs or anything else which I come across. I hope you will check back each Monday to see the latest link and learn more about the people and the services offered at the other end of the link.

Waking up this morning in Denver to some spring snow, it was a frozen day. While the roads were still warm enough to prevent snow from gathering on them there was a dusting of wet snow on the other surfaces. April is indeed the third snowiest month in Denver, but the snow this morning was a good way to start off a weekend of hockey at the Pepsi Center.

The Frozen Four, the final four of the NCAA D-1 Men’s Hockey Championship, is in town for the first time since 1976 and first ever at Pepsi Center. Even though three teams from Colorado made the tournament none of them advanced to the frozen four. However with strong college hockey teams in Colorado and an interest in the sport it will be watched. In the first match this evening Boston College will play the University of North Dakota, followed by Michigan and Notre Dame squaring off with the winners playing on Saturday.

Even though UND is the top seed overall, I am picking Michigan to win it all this year for their first championship in hockey since 1998. Last year Michigan State won it all, so if my prediction is correct it will stay in the state which looks like a hand for another year. Will I be correct? Saturday will reveal that answer.

Today is the first Friday of the month, and in many cities across the United States it means a chance to visit the galleries in an art district which stay open late. Here in Denver we have two areas which have an art walk. The one I will most likely visit this evening in the Santa Fe Art District just south of downtown which has their event from 6:00 – 9:00 PM. There is also an art walk on Tennyson in northwest Denver, however some recent developments could be impacting the viability of this event in the future.

If you are not in Denver, you will find most cities have art walks of their own on the first Friday of the month. This includes Missoula and Art Link Phoenix (one of the largest in the country) as events I have attended in the past. I could provide a complete list, but it would easiest if you just check your daily paper or free weekly alternative publication to see if there is an event in your town. I am sure there is something for almost everyone reading this, so be sure to head on out and check out the galleries in your city this evening.