This past weekend in Denver, Colorado the Rocky Mountain School of Photography presented their Weekends program to a sell out crowd for which I was a volunteer. During the course of the weekend 200 participants attended sessions taught by Doug Johnson, Tim Cooper and David Marx who are instructors with the school.

Participants attended 3 two hours sessions on Saturday followed by 2 sessions on Sunday as well as a critique of images submitted by the attendees. The information offered in each of the sessions included photography basics, digital workflow, macro, people photography, night and low light photography just to name a few. As each instructor taught a separate session in each two hour block, participants could select a topic for the period of time which interested them the most. Even though I was a volunteer I did attend some of the sessions and found the wealth of information provided to be beneficial and from what I heard from attendees they were happy they attended as well.

There are a few cities left this year for their Weekends program, which include Des Moines, Cleveland and Madison, WI. If you are in any of these cities I suggest you look at the RMSP Weekends website to see if there is still space left to attend as I am sure you will be glad you did.

While 3 games have already been played in the 2008 Major League Baseball season, today marks the start for the remainder of the teams. What would be opening day without some early spring chill in the air but it is like this every year. Most folks know I am a die hard Chicago White Sox fan so it shouldn’t be surprising I am looking forward to their game against Cleveland later today and will list on XM while working. In 2005 when they won it all, it was right after the Red Sox won it all…. and who won last year, the Red Sox…. hmmm. Yes it would be nice to have another run, but the AL Central this year is the toughest division this year so I won’t hold my breath but will be optimistic.

Even though we have 6 months in the season, I thought I would predict who would win each division and see if I am even remotely close come the end of the season. So here it goes.

Central: Chicago Cubs (pains me to say that)

Of course I would love to see the White Sox in the above list, I am posting this with my head and not my heart. We shall see what happens in the next few months, as the season progresses.

Adobe announced today a version of Photoshop available on the web at no charge, or at least for now. Adobe Photoshop Express which was released as beta today takes a step for Adobe of bringing applications online which some other companies have been doing for a few years, including Google.

I did the test drive and played around a little bit finding the adjustments offered are preset and quite standard but as a tool to help users become more familiar with the Photoshop name it may be good for Adobe. Most people I know hear Photoshop and think of a huge product which is confusing and for photographers or graphic designers. While it may be true this is the target audience for the full blown version, Adobe does have their successful Elements program and introducing users to the world of Photoshop may help the marketing for this product. As more and more users obtain a digital camera the demand for tools for an average photographer will start to increase and Adobe is trying to get into this mix. The one problem I have with online applications is the fact they are online, and you are limited to usage in particular locations. Additionally if you decide to work at a location with WiFi who knows what type of connection speed they may have as well.

Since this product is in beta at this time, Adobe also is looking for your feedback as well of how to improve the product moving forward. I recommend giving the product a test drive and see what this new option brings to the consumer market. As a photographer I always find it necessary to keep up on new products in both targeted for the professional and consumer as you never know who will be asking you a question once they find out you are a photographer and what it could lead to in the future.

It was just one of those days this past Sunday. After waking up early to head into the foothills for a fresh dusting of snow I just couldn’t find a location which would work. While it was dark heading up the Boulder Turnpike and onward into Boulder Canyon towards Nederland my mind was concentrating on the snow covered canyon road more so than a good spot. Just prior to sunrise I found a location which I thought would work as the moon was starting to set over the Continental Divide but the location did not develop as I had hoped. With some nice light on a cold and clear morning I traveled along the Peak to Peak Highway and eventually made my way from Rollinsville towards the east portal of the Moffat Tunnel. For those not familiar with the Moffat Tunnel it is a 6.2 mile (10 km) train tunnel underneath the Continental Divide providing a more direct route for train travel from Denver to Salt Lake City. Open now for 80 years it is still an important link through the mountains.

Once at the east portal area the wind was howling, not making it easy to really get any images of the snow and rich blue skies. With the wind and a disappointing morning, the following image is one of the better ones taken while battling the wind at the foot of the divide and Rollins Pass. The wind was blowing left to right, with the east portal to the left of me. 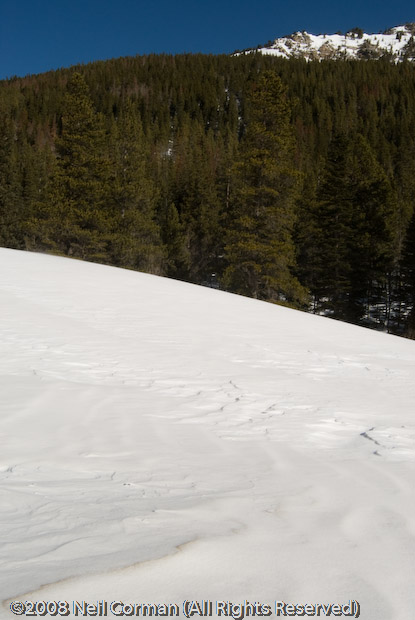 At the end of every season the Denver Post has been publishing a series of images their photographers have taken during the season with a Holga. For those of you not familiar with the Holga, it is an inexpensive camera originally made in China. With the inexpensive construction it is known for light leaks, blur and other distortions which give images an artistic look in their own. Photographs made with the Holga have won awards in the past including one by David Burnett of Al Gore in 2001.

Check out In Winter’s Light from the Denver Post photographers.

Just wanted to give a quick update on the status of the new website. At this time testing is taking place on some of the components and I am looking at it being live next week. Please check on back to see the latest updates, or sign-up for the mailing list to receive a notice in your inbox upon the roll-out.

I also wanted to provide an image of some recent work. The following image was taken last month while visiting Glacier National Park. 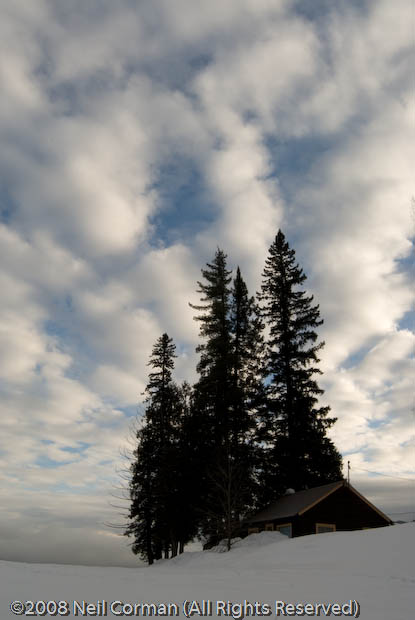 Did you remember to get your bracket completed? We are already down to 64 teams with the opening round game this past Tuesday. Today 16 teams, will have their road to San Antonio end and many businesses will have lack luster work performance.

Also found out here in Denver the Arizona/West Virginia game will be shown, but not as a constant feed. So if the game is a blow out or something becomes interesting in another region they will switch to that game. Wondering about the games for Friday in your region, the coverage maps are also available.

Do you live in Washington DC, Chicago, Los Angeles, or San Diego? If so you can take part in the pilot program announced by the US Postal Service yesterday to recycle small electronics and inkjet cartridges. Just stop by your post office and pick up a free envelope to mail your old electronics to the company which won the contract to handle the recycling. If the pilot program is successful it could be nationwide by the fall.

If you are not in an area where this pilot is taking place, I thought I would mention some other options you have as well. You can recycle your iPod at an Apple store and get 10% off towards the purchase of a new model. If you are not in the market for a new iPod but need to recycle an old one, Apple has a program were you can get a shipping label for free to send them your old iPod and mobile phones no longer used. In addition many big box electronics stores have drop off points for old batteries, phones and electronics. Buying a new computer, most manufacturers have a method to recycle older machines for free as well. There are many options out there for recycling old electronics from these few mentioned, to programs which benefit schools.

If you are wondering the best method to recycle locally, check out the following website or give your local government agency a call to find out options you have in your town.