Today I was at the Rocky Mountain Metropolitan Airport in Broomfield, Colorado and captured an image looking towards Denver. Even though the sun was in a position which made it difficult to shoot, in addition to the haze which had set in the area I thought the positioning of the aircraft and the discussion of the two individuals told a story in itself. 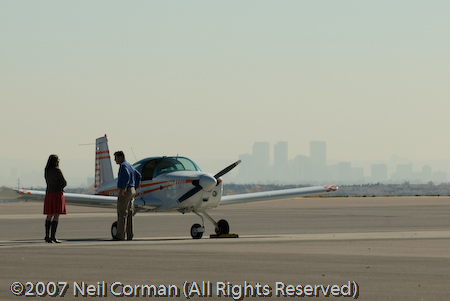 For the month of November I have decided to take an pictures each day this month. For every day I will post one image to the blog for everyone to view and also provide feedback. The image selected may not be the best of the day or my favorite, however it will try to be something different.

For the past four and a half months I have spent time in Missoula, Montana at the Rocky Mountain School of Photography summer and digital intensive programs. This was an experience which I will never forget and has given me a different outlook with not only my photography but also life. During the summer I met some incredible people in my group and as well as in others. Since today is the final day of the program, I thought I would share with you a blog posting I made on our group website earlier this week regarding the summer and the people I met in my group.

A little over four months ago on an early June morning we were thirty unique individuals in a large room from across the United States and Canada.Some were students, recent graduates, and teachers.Others were fed up with their job, retired, or just taking some time off.While we may have had different backgrounds we had one common thread bringing us together, a passion for photography.On the first day, we quickly learned about our classmates in the introduction sessions as the reality of the time we would spend together during the summer quickly became apparent.

As the temperatures rose during the course of SI, so did the level of respect for each other. Whether it was a cityscape, night scene, landscape, macro flower, portrait, or a creative studio image we became to appreciate each others work and more importantly each others favorite photographer . As this respect grew, we also began to offer suggestions inside and outside of class to help each other grow.

We sought the refuge of the record warm summer in air conditioned places around town, the mountains or deep in the basement of RMSP with the smell of a fresh batch of fixer on Saturday mornings. While battling the heat and smoke of the summer we were able to refine our craft and create images others may not have been able to do if placed in a similar situation. We also watched as some members of the group fell in love with the darkroom, the studio, Glacier National Park, looking for moose or one of the many other items available in western Montana.

In the span of a summer we changed from thirty unique individuals to a family. In eleven weeks we learned so much about each other not only by being around our family but also by looking at the images we created. Each of these images told a story, which many of us will not forget.

But then the end of summer happened and part of the family returned home. School was waiting, trips to the southern hemisphere and of course photography to pursue. In the less than two months since summer intensive has ended members of Group E and F created businesses with incoming revenue, exhibitions in their hometown, had assisting gigs, and other opportunities within photography.

Those of us which spent the fall in Missoula attending digital intensive are experiencing the same feelings those now at home did two months ago as reality nears. A thought which comes to my mind lately is Quo Vadimus. You may be thinking right now, huh what’s that? Quo Vadimus simply stated is “Where are we going”. Yes, home could be the answer or even the Union Club on Friday night but let’s get past the immediate answers. Each of us is set to take a journey through our photographic visions, interests and goals. We will bring our sense of place to others using our viewfinders and film (or memory card) to record a moment in time we thought was special enough to press the shutter. By using the knowledge obtained here in Missoula, we are not only much better photographers, but better story tellers and visionaries. I know we will have those bad shooting days, the light is just not right, why wasn’t I 20 meters down the road, or how did that stick grow out of their head moments and other problems but those we can work through. By having those goals or milestones of where are we going will get us there. Of course on those bad days you know there is the Group E/F family which knows what you are dealing with and why you may be frustrated, in addition to probably experiencing a similar roadblock as well. So as we all head home and figure out where we are going just remember 29 other individuals are here as well and wanting to know what that may be and how you got to that point.

Today was the initial portfolio review of the Missoula photography project I have been working on the past two months. This project has been coined, “missoula. a photographic discovery of unexpected montana…”

The portfolio review consisted of twenty minutes with reviewers who live locally in Missoula, in other parts of Montana as well as outside of Montana. With a varying range of backgrounds from the nine sessions I had, it helped provide some valuable insight into the content of the project at this time. For the most part the feedback was positive and the suggestions provided brought some additional thought to images I should seek out to include into the portfolio in order to meet the goal.

The next couple of weeks I am hoping for some good light as the peak of fall colors are just about here in the city of Missoula and will add another dynamic in itself. I am targeting to have a portfolio available for viewing online later this month.

Tonight is another First Friday in downtown Missoula, and this month I will have work displayed at The Darkroom of Montana Gallery. First Friday is always a great time to check out the newest art exhibits at the many Missoula galleries.

So come on out and experience First Friday!

As I look out the window in western Montana to a dreary afternoon, I have just realized fall is upon us. After a summer of record breaking heat, dry conditions, and smoked filled skies a change is here. I vividly recall three months ago on the first day of summer heading out early in the morning with some friends to photograph sunrise at Lee Metcalf NWR, which of course in western Montana meant an early morning. Little did we know what to expect in the weeks and months ahead as we dressed in layers on a cool morning.

Now it is a time to look forward on the beauty of fall. But the question which I have heard asked numerous times is will the above normal summer temperatures make the magic of fall different? I’m not the one to answer the question, but maybe a call to a friend who studied meteorology is in order. Either way I am doing the research now and looking for the locations which may yield a punch of color in the upcoming weeks, since sooner than it arrives the magic of fall will be gone.

If you are in the San Francisco Bay Area and are looking for a child portraiture photographer I would suggest checking out Annie Florin Photography. Annie is specializing in natural light, and natural environment child portraiture which can provide a different perspective versus a studio setting. Check out the website to view some of her work, and give her a call if you would like more information.

This evening I headed downtown for First Friday in Missoula, Montana and it was a special treat since I knew two of the artists showing. The first photographer was Melanie Wright (http://www.stonesthrowphotography.com) presenting some of her photographs at The Catalyst. Melanie has quite an eye for seeing which is obvious in these photographs.

The second photographer was Marcy James at Gallery Saintonge, who up until recently taught black and white photography at the Rocky Mountain School of Photography where she is now the Curriculum Director. Marcy’s newest work of Butte was quite extraordinary and a mix of black and white and color. With the black and white she used some alternative methods of presenting the work, with layers of wax over some of the images and other techniques to draw the viewer even more into the image. While I recognize Marcy more so for her black and white work, I was surprised to see a collection of birds in color. However the presentation of these creatures is quite unique with images of birds in trees and then many small 2×2 blocks above with birds in flight, airplanes and other items you would find in the sky. It is quite hard to describe but an impressive collection.

If happen to be in Missoula this month, I would highly recommend making a stop to check out the galleries on Higgins.